Euthanasia is the...... painless killing of a patient suffering from an incurable and painful disease or in an irreversible coma. Our main points: It’s their decision. Peaceful death compared to a painful life/It’s good because it can put people to eternal rest, because they will be in a lot of pain. Dying is not a crime Everyone have the right to decide how they should die To stop the risk of prosecution as it is considered law-breaking if someone witnesses someone committing suicide. This way those who choose to take euthanasia can do it with the company of loved ones without breaking any laws. God is love and Christianity is about love and compassion and my point is that keeping someone in pain and suffering is not loving but pure evil. Euthanasia can be the most and loving action and the best way to put someone you love in a painless most peaceful way. Most people would have their pets put down to if they were suffering, this would regards kindness. Why can’t the same kindness be given to humans? If the patient is old and suffering is watching them spend their last hours in pain really satisfying. As a child of the elderly do we want our parent to be suffering to death, or do you want them to say their goodbyes and then get put to sleep without pain, this way we would understand that our parent went to rest with peace. To allow sufferers to depart this life while still possessing their mental faculties. Those who are unwell don’t want people looking after them including wiping bottom, bathing, hand feeding. Their main points: The money spent on paying for euthanasia could be used to pay Hospice services etc. Against the belief of Christians “It would make caring for disabled, mentally ill and elderly people optional, instead of the default.” Alternative treatments are available, such as palliative and hospice, we do not have to kill the patients with down syndrome, nearly all pain can be relieved. “assisted dying” – making it legal for people to deliberately help others commit suicide – is not the solution. The assumption that patients should have the a right to die would impose on doctors a duty to kill What they could say back to our main points and how we would shut them down: It’s a duty for doctors to look after patients until they take their final breath. Doctors should never give up Use these patients for research to find the cure to different diseases in order to prevent the same scene to occur with someone else. What we could say to shut down their main points: Take in account the oath of Doctors to not harm their patients. THe hippocratic oath to swear they would do no harm. Letting them spend in their final hours in pain is too much of a harm. We can use this method to put them to rest in peace therefore we see no harm, as life for them in that stage Caring for the elderly, disabled, or the mentally ill puts a strain on people financially, emotionally and physically. Having people put to rest via Euthanasia would be good seeing as it would be quick and easy and spare people the money they would have to pay, and the trauma they could go through if they had to care for the elderly/mentally ill/disabled. A lot of money is being spent for medication to reduce amount of pain therefore having euthanasia will end the pain as well as reducing the amount of money being spent to help care for the sick people. Take into account not everyone is religious therefore saying it is against belief of christians won’t apply to everyone. It’s their decision whether they go to heaven or not. It comes down to their own decision if they have strong religious beliefs they will not have euthanasia. Allowing family/patients/friends to suffer in pain day to day is also not the solution and can also be looked at as allowing someone to die slowly. There are examples of euthanasia in the bible in 2 Samuel 1: 9-10 “Then he begged me, Come over here and put me out of my misery, for I am in terrible pain and want to die .” So I killed him.”
Posted by Unknown at 17:42 2 comments:

Cooperative interaction is when two individuals interact with each other for their benefit. For example, Pukeko’s cooperatively interact when a female and male born a child. They interact as parents to protect, support and keep the child healthy to the best of their ability. Hierarchy is a method used in some species to balance out equal access to resources such as food, mates and territory. For example, Pukeko’s have a dominant leader who dictates what is done with the resources. When food is brought into the territory the dominant leader has first access to the food, however the dominant leader only eats a fair share of his worth as its species must eat as well in order to survive. Therefore a good strategy to reduce energy into fighting for resources. Territorial is an area which is defended to other members of the specie. This area is used to house, protect children. For example, Pukeko’s have their own territory where they would defend if another organism tries to intrude. Pukekos have territorial so that each Pukeko knows its place. They use sounds or their beaks to peck as a method to defend rather than using all energy into fighting to the death over territory. Cooperative interaction is carried out to benefit the growth of the family. Families who have help from next of kin members are more likely to survive. Pukekos have members of the family who are selected to breed, other members of the family are their to help supervise the babies and this is called kin selection. Pukekos will only help supervise babies of their own family. Similar to how us human cooperate. I would most likely supervise my nephew or niece in comparison to a stranger’s baby. Hierarchy is carried out to reduce energy being used into fighting for resources. For example, if there was no hierarchy most species would fight till the death to win over the resources it needs to survive. Whereas with a hierarchy, species have a dominant leader who is in charge of the group. This helps to have balance in access to food, mates and territory. Therefore this reduces the numbers of death in their population and increases survival in species. Territorial is a method used to give privacy to species. Territory is also a way of protection. For some species, territory may be hard to approach e.g. high up in a tree, to hide from predators. Cooperative interaction benefits the species as a group as organism have more protection if in danger. E.g. if a predator tries to kill a young one, all members of the family will be their to fight off the predator. Territory in Pukeko’s also overlaps with other territory of other families. Therefore more of a chance conflict over territory will be between Pukeko families. Cooperative interaction benefits an individual of a specie as it has a higher chance of survival when in a larger group. A predator is less likely to attack when in a large pack in comparison to an individual fighting alone. Hierarchy benefits an individual of a species as it allows that individual to have access to its fair share of resources without competition this is also similar to benefits of a group in the species. Territorial benefits an individual of a specie as it allows a place of comfort and protection.
Posted by Unknown at 19:23 1 comment: 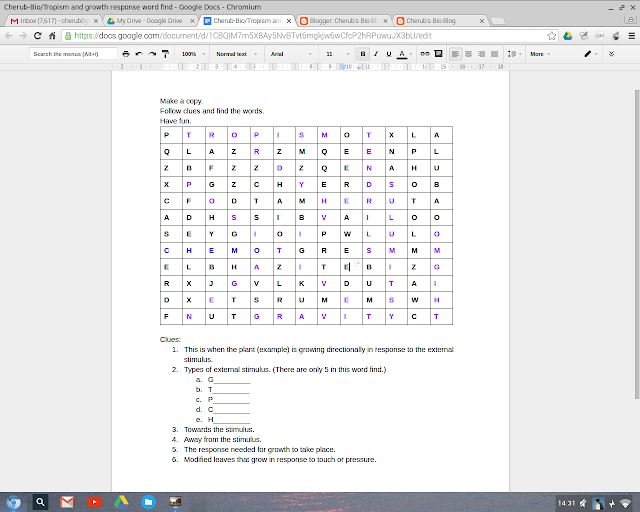 Today we got the opportunity to have 10-15 minutes of being a teacher. We were each given a paper with a topic on it. With this topic we had to learn about it in depth and plan an activity as a way for the rest of the class to learn about it. My topic was Tropism and Growth Response. After a while of learning about this topic I decided to create a word find with little clues written out at the bottom, to help the students figure out the word.
Posted by Unknown at 19:37 1 comment: 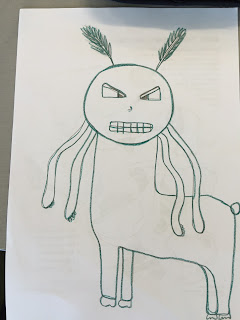 This is my critter, its name is CheerUp. CheerUp got its name because that was the number one thing most people seemed to tell him "Eh Cheer Up bro".
Its also got feathery antiners that has tiny nostrils at the tip, which can sense when danger is around. CheerUp's number one predator is usually the Flonty's. However CheerUp has the ability to use its antiners to sense the Flonty's from the rotten smell they have. CheerUp has a moist body which means it cannot be in the sunlight as it may dry out. It lives in dark moist conditions such as forests.
What is my environmental cue and my adaptive advantages?
Posted by Unknown at 16:44 4 comments:

Kiaora!
My name is Cherub and for our first lesson in Biology we are asked to write a summary about Diabetes. Diabetes isn't a new topic that I have studied as in year 11 I did an internal on it. Therefore I do have some knowledge and am aware of the effects it can bring. *WARNING* This is just a little review of what I remember about Diabetes so this post won't be 100% true or relevant. There are 3 types of Diabetes which is Gestational Diabetes, Type 1 Diabetes and Type 2 Diabetes. Gestational Diabetes is when a woman gets Diabetes while pregnant. Type 1 Diabetes is when someone is born with it as in damaged organs while developing. Type 2 Diabetes is when someone eats too much high fat and sugar foods.
Posted by Unknown at 14:49 1 comment: